Yılmaz Atadeniz’s Deathless Evil (Yilmayan Seytan, 1973) is not well known in its homeland. But the film has been published by an American company, Mondo Macabro as DVD. This DVD also includes Tarkan vs. Vikings (Tarkan Viking Kani, 1971). But we don’t know why Yilmaz Atadeniz’s name is mentioned as Robert Gordon, and lead actor Kunt Tulgar’s as Kunt Brix on this DVD. 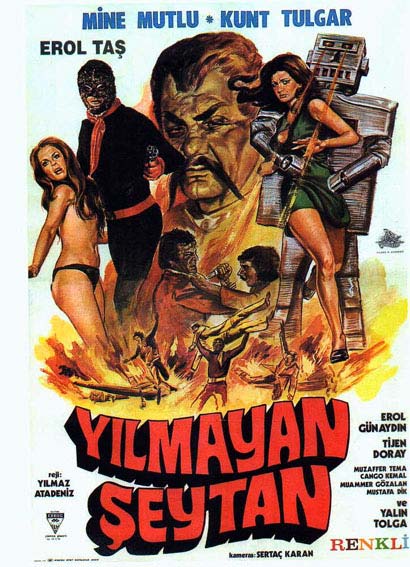 One day, a warlike young boy Tekin learns that his father is not his real father; and his real father was a superhero, called Bakirbas (Copperhead) and was killed by an evil guy, called Dr. Satan. As soon as Tekin learns this truth, the revenge becomes the reason of his existence. He collects his father’s superhero stuffs (a mask and a plastic snake… most useful equipments, a superhero can get) and starts working on revenge plans. At that time, his opponent, Dr Satan is very busy with his evil plans. He plans to steal an invention of a professor, what is made of a very rare material, Tangayt, (and also having flashy lights) and to equip this device on his robots and seize the planet. But Tekin the Copperhead will definitely not allow him.

We see Erol Gunaydin as the most useless superhero apprentice ever. He is specialised in “speaking with rhymes”, and he is of no avail at all. So, he’s just bullshitting over the film. As for Tekin; actually, he has no superpowers; he’s just doing some “run on the train, kick bad asses” and stuff; but that “Mask” thing is a bit tricky. When he wears it, he starts jumping around, and his superhero costume suddenly appears, although he only wears the mask. The bad guy, Dr Satan has no superpowers either; he just invents some evil stuff and he’s got some footmen, who obey his endless orders with no question. The reason why these men obey him is that Dr Satan shackled bombs on their body and he has the remote control. (You may wonder how he convinced them to carry these bombs; well, this is also our question) So, it may sound like a film with ordinary people; but actually the characters are very amusing.

“Copperhead” is also the name of a very dangerous species of snakes; and our hero uses snakes as symbol in the film. In light of the foregoing, we found out that the film is actually an adaptation of the film “Mysterious Doctor Satan” (John English & William Witney, 1940). But anyway, we believe that Yilmaz Atadeniz has embarked this film with big hopes and dreams. As he says on the documentary film, “Turkish Pop Cinema”, which you can find in “Deathless Evil” DVD; he was imagined that the robots in the film would be in human body form, and when you peel their skin, you would see the cables and electronic circuits inside. But with the improvisation fight scenes and pointless dialogs, it’s a fact that the film doesn’t look like a diligent job as he imagined. But on the other hand, these faults are also the things what make the film spectacularly amusing. As Yilmaz Atadeniz also says on the documentary; he took many images and edited them to make 5 different films.

Fight scenes in the film are just funny; you can’t see any other film that the lead actor falls down when he jumps on and brings down the couch, while beating the bad boys. Well, couch can bring down when the hero jumps on, but the hero shouldn’t fall down with the couch like a sack of potatoes.

And the dialogs… Please find some examples for the film’s awesome dialogs as following; Copperhead beats a bad guy; and the guy begs “Stop! I will tell all I know”, but Copperhead says “I know what makes you talk!” and continues beating him.

Here is another funny logical flaw; the professor tries to save a bad guy from the bomb on his body, he says to the guy; “Step on that rubber plate, it avoids the electricity” but the bomb doesn’t cause an electric shock, it just explodes; and the rubber can not avoid the infrared light, which triggers the bomb. And another questionable scene; why doesn’t Dr. Satan trigger the bomb on the one of his men, who talks to the police before he talks, but does it after he tells everything?

And there is another awesome scene that Dr Satan puts a hidden camera on a good character to watch professor’s actions; but we don’t want to tell this one, you need to see it with your own eyes.

As for the film music; you can easily recognize Pink Panther and James Bond soundtracks in the film. (Somebody says “Copyright”?; Whatta hell does it mean?)

So, in brief; Deathless Evil is just a priceless treasure for fantastic Turkish cinema lovers. The film was actually the serial of a film, called “Satan with the Mask” (Maskeli Seytan, 1970). We suggest you to see also this one, as well as “Kilink” serial from Yilmaz Atadeniz; and wish you wonderful days, full with cinema.

The Last of Us, İnsanlığın Sonuna Hoşgeldiniz!