After I saw Hasan Karacadag’s thriller movie; D@bbe, i swore that i would never, ever get close to anything made by him. But my damned fantastic cinema fanaticism made me give Semum a try. I was very decisive to criticize free from bias, although I do not know how much I can get over prejudicing when the subject is a film, directed by Hasan Karacadag. D@bbe has been the realized form of “High expectation = Great disappointment” for me; it’s a very bad copy of a Korean film; Kairo, and made me give up all my hope about the new Turkish fantastic thriller cinema. But I’m still hopeful thanks to Kucuk Kiyamet, which made by Taylan Biraderler, who also previously made a complete crap thriller, called Okul.

I started watching Semum in such a state of mind. And soon I said “alas!” when i see the generics with the X-men taste, thrusting “what is Semum?” “Semuuum!” explanations into the eye. But after these, there was no pathetic D@bbe crap on the screen; there was a film with a proper story (at least).

Canan and Volkan are a happy couple, enjoying a good marriage. They have got a house, with a lots of Ikea wares, just like in their dreams for the years. Everything looks perfect for them; until… One day, Canan (who may have no worry except being supposed to be a travesty because of the neuron in her voice) starts acting weird that making no sense for anybody; she loses her control, acts like she is under control of something. That makes Volkan so sad and he tries to find a way out of this situation. Also Canan’s friend Banu, a friend of Volkan, the nervous gardener and their next door neighbour, who is a suspect of murder are also very sad about Canan’s condition…etc. etc.
Semum’s story has a smooth fluency and is very consistent, although it’s a bit cumbersome. But if we consider the entire scenario, we find out that Semum is a punch drunk film. Somehow it influenced of Amityville Horror, Exorcist, Shining, Constantine, Rear Window, Skeleton Key, Pet Sematary, Pumpkinhead..etc.; but instead of seeming like one of these, it rather tries to mix all of them, and it’s broadly good at this collage. But I wish the director wasn’t tried to use all the clichés of the 70’s horror movies in one single movie, like a child in a toystore. Some of them don’t even fit at all, for example using the ominous number; “13” (first seen in Scandinavian mythology) doesn’t look fit for such a movie, fed by the oriental tales.

I’ve seen a few interviews of Hasan Karacadag on some TV shows and magazines; he says that he learned from his mistakes on D@bbe and D@bbe was actually made for Japanese underground video market. Well, yes, he learned something from his mistakes, as it obviously seems on Semum; but it’s a pity that the reason behind the ignorance of D@bbe by its director is said as “we made it for Japanese market”; as it would be considered as just a copy of a Japanese movie in Japan. (But at least, I’ve found an answer to my question; “Why was police chief worn a Kimono?” Yeah, of course to catch Japanese audience!) 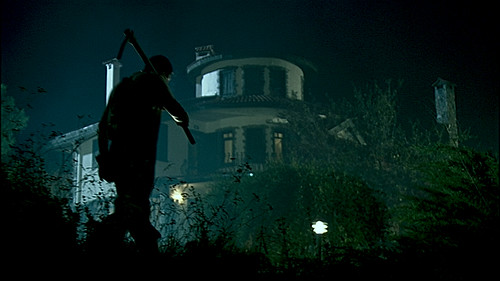 In my opinion, Hasan Karacadag’s problem is not the ideas or oriental myths, but casting. In D@bbe, completely incapable young performers were ruined down the film. Of course, great directors also used non-actor performers, but they expertly used them in accordance with the graphical ambience of their movies. In Semum, however there are much more talented names in the cast; we can’t see any impressive performance. Ayca Inci does her best, but whenever Burak Hakki’s mimics, tended to comedy and the Gardener with news reporter diction show off, all audience in the cinema theater started laughing. No matter how much the director of a film struggles to express the feeling of sentimental scenes; it mostly depends on the actor/actress’s performance, it’s quite beyond the director’s ability on such scenes. For example, on Babam ve Oglum (Cagan Irmak, 2005); the scene; “the father gets down, clamours, rips his clothes when he learned his son’s death” could have been a comedy without Cetin Tekindor’s superior performance. But thanks to Cetin Tekindor’s cozy, heart warming performance, we deeply felt the father’s pain with the tears in our eyes. By this connection, I imagined an alternative casting for Semum; I would prefer Tardu Flordun instead of Burak Hakki; and I think Cetin Tekindor would be perfect for Imam role. I don’t even want to talk about the Gardener role; it would be even much better if you’d delete all the parts he shows off.

There are also some concatenation flaws in the movie; Volkan accidentally drives over Canan’s cat to death in the morning; and then the Gardener buries its body in dusk, and then, Canan seeks her cat around noon, in the same day… By the way; the cat’s crushing scene looks very realistic; and I thought it may be real; if so, this scene may give Karacadag big trouble with Animal rights associations.(*)

It will be another adverse comment; but i just can’t stand not to write about the argument between the psychiatrist and Imam; in other words “Science and Religion”. It is an ancient argument; but on Semum, this argument is redounded to Imam’s advantage. So, it looks like the exculpation of the superstition to me; the movie has lost its neutrality as well as its innocence at this point in my opinion.

As for the CGI effects, which look like backbone of the movie; although it’s possible to coincide to much better ones even on an ordinary PS game. But I still can say those are progressively bold and used appropriately. (I don’t understand the logic behind the obstinacy of using CGI effects though!) I think; a much higher persuasiveness and audience satisfaction could be achieved by make-up tricks and some animatronics (Like Rick Baker’s, Stan Winston’s or Tom Savini’s works). So, here my personal opinion is; if you can’t use CGI effects as good as in Beowulf, only a cheap anime movie can be what you get. By the way; it’s impossible to overlook the true likeness of Semum character and Eddie of Iron Maiden.

This critic may sound adversary, but all I want to say is; Hasan Karacadag made a good job in Semum, although he couldn’t get rid of same old “bad habits”, which damages Semum’s atmosphere. However I think Semum is not as noteworthy as Kucuk Kiyamet, it still deserves to be interested in; and moreover I can say that it has the most powerful imaginary interaction, I’ve seen in fantastic Turkish cinema until now. But I think Semum could be more successful if Karacadag was preferred a more roguish tempo with some comedy elements, like 80’s movies, rather than a tranquil, placid, pestilent tempo, which suited Kucuk Kiyamet very well, but is not for Semum. Because, however Semum is a movie, taking itself very seriously; everybody in the cinema theater has just laughed on some scenes. There were no joke, but these laughs were mostly driven by the irrelevant (but serious) acts of the performers. I do wish to make an interview with Hasan Karacadag about his future projects and his candid thoughts about Semum. I’d like to add something; there is a nice reference, in Canan’s plans, she tells while she and Volkan talking after her cat’s death by an accident. I like such clever things.

(*) We have got an e-mail about the cat’s death scene from Semum’s visual effect team as below;

“Hi, I’m one of the compositors of Semum’s visual effect team. I’ve been very happy when I read the part about the ‘crushing of the cat by car’ on your critic; because this plan belongs to me. It might be perceived as a real crushing, because of the plan stills too short on the screen. I hereby send the screenshots of the plan; I wasn’t so happy with it, when I examine it screen by screen; but it’s very nice to hear that you supposed the kitty has really died :)

With my best wishes and regards.“

Well, that really made me relieved about the kitten :) So, the plan is really successful, we hereby congratulate the Semum’s effect team one more time and attach the screenshots of this plan as below;

The Last of Us, İnsanlığın Sonuna Hoşgeldiniz!