A gothic horror-thriller by Onar Films, filmed as black&white in 1970. The film was lost from the archieves of Onar Films, and a copy of the film was found in the archieves of Yeni Lale Film Studios by cine-researcher and historian Sadi Konuralp in the year 2000. The movie is directed by Yavuz Yalinkilic and the lead roles are performed by Aytekin Akkaya, Sema Yaprak, Kerem Mertoglu, Sirri Elitas and Jirayir Carkci.

A couple (Oya and Melih) standing by the road in a place (i know there is Princes’ Islands, Istanbul; most probably Buyukada) is taken by a pheatonman to Mr. Adem’s Mansion; as he says; there is no other place to stay, the deceased Mr. Adem bequeathed the Mansion to be a guesthouse. On the way, Oya continuously fidgets of uninhabited places, they pass and the pheatonman, saying “It’s the 15th day of the month, we must hurry” million times. The mansion is a beautiful wooden building with nice decks of a great wood handicraft, a typical Princes’ Islands architecture. So, a mansion in a lonely place, a weird looking servant, an evil ghost and the victims. Actually, this couple’s story supposed to be just the introduction of the main story with these elements. And normally, such introductions take only a few minutes to make the audience understand how the things go in the movie; but in The Dead Don’t Talk, it takes the half of the film with their purposeless story.

I must admit that Oya and Melih are kind of fit for any kind of horror movie; even though Oya is already frightened when they get in the mansion, they don’t go out, and even the things go more bothersome; –Hasan, the bizarre servant does really weird things, and such- they go to sleep (also in different rooms). Anyway, when the main evil character finishs with them, the scene changes suddenly into an irrelevant conversation between two men, and then suddenly we see the ghost on the job with different victims.

One day, Sema comes to the town as the teacher, and taken by the same pheatonman to the mansion. The same old routine repeats; self-opened door, a meal prepared for the guest and Hasan, the bizarre servant acts weird, and Sema goes to sleep. The day after (or at the same night, but the day at the same time; time is really an illusion in that movie) she mets with a huntsman, Kerem; and they made a quick chat about ghosts and bizarre things happened in town; and Kerem also mentions about the “15th day of the month” thing.

In the night, the evil ghost comes to take Sema; after a pursuit, he takes her, but somehow frees her afterwards. Concurrently, Kerem, Hodja and the funny character of the movie talk about the ghost story of the town; Hodja tells another ghost story, previously happened in town. The day after, Hodja, Kerem, the funny man and Sema make a plan to bring the evil ghost into peace. The plan is the combination of western and oriental cultures; but of course it works and all the mystery is solved.

Only Aytekin Akkaya’s performance as evil ghost, and Sirri Elitas’s as funny huntsman can be considered as good, but all the others are just acting; nothing special.

In spite of the bad producing, bad performance, scrappy scenario and all the cinematic mistakes; I’d like to mention about an artistic scene in the movie. The Mirror – Shadow – Light scene, as you can see the screenshots below, is a really good idea; but i wish the director wasn’t used the same trick at the same location many times with different characters during the movie. 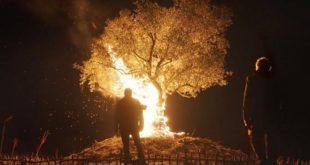